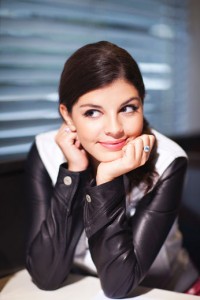 Sweet melodies of summer will soon be floating through the air at Blue Mountain.

Renowned musician Nikki Yanofsky performs Friday night as the headline artist at Jazz on the Mountain at Blue, which runs July 3 to 5.

“I’m excited to play there,” Yanofsky said of the upcoming show, adding that she’s looking forward to enjoying the natural beauty of the surroundings and the atmosphere of a relaxed summer concert.

“I know it’s outdoors and that’s always a huge plus. I love performing outside. It always reminds me of that first show I did. Especially at that jazz fest time of year everybody has their festivals in the summer and it’s just sort of nice and everyone’s so relaxed, everyone’s on vacation, everyone’s there to enjoy. And you definitely get that sense when you’re there to perform like that.”

From a young age Yanofsky, now 21, has wowed audiences with her raw talent and compelling vocal style.

Yanofsky’s professional career started in her hometown of Montreal. While singing around the city in support of various charities, she was discovered by an important aficionado of musical ability.

“The founder of Jazz Fest heard me and asked if I would open the whole Jazz Fest, so that was when I was 12,” Yanofsky recalled. “That’s how I got into the professional world of singing and I haven’t stopped since then.”

The Montreal International Jazz Festival is the biggest jazz festival in the world, and being given such an opportunity at such a young age had a big impact.

“That actually full-on affected the way I listen to music, because when I got invited to the Jazz Fest when I was 12 I was only singing Motown, like a ton of Aretha Franklin, Stevie Wonder and stuff like that, just stuff that was really ‘60s-oriented still,” she explained. “But then once I got asked to the Jazz Fest I thought ‘I should probably learn some jazz.’ So, actually, Montreal opened my eyes to jazz — opened my eyes and ears.”

After searching around a bit on her computer, Yanofsky discovered one of her musical idols, Ella Fitzgerald.

“The rest is history as they say,” Yanofsky said with a laugh.

In 2010, Yanofsky recorded the official anthem of the Vancouver 2010 Winter Olympics “I Believe.”

“It was a huge honour and it was also a huge opportunity to get heard by millions of people,” she said, adding “I was really blessed to be a part of that.”

Despite the song “I Believe” being a pop ballad, Yanofsky says she was pleased by fan mail and messages she got saying how looking up her name then led fans of the Olympic hit to discover soul, jazz and the other genres Yanofsky performs.

So, what is her style?

“I would just say my style is very classic. I’ll sing a lot of just classic oldies songs, my own original music always tries to have that kind of feel and aspect to it. I never want to do something that’s too against — it’s just not me to be super like ‘trendy’ like try following the trends,” Yanofsky said. “I like good music and I like to have my voice front-and-centre and have my song extremely melodic. So I guess to describe my sound I would say kind of classic and timeless.”

Yanofsky’s first album Ella…Of Thee I Swing was released in 2008, followed by Nikki in 2010 and Little Secret in 2014. She’s currently at work on a new album with a single expected out in the next few months.

“I don’t have a specific release date, but it’s coming along really quick and really well,” she said.

Yanofsky says there has been a real progression of her music and writing through the course of her albums.

“I always say ‘you can’t really hold someone to what they’ve done when they were 14,’ because you change a lot between 14 and 21, a lot. Physically, mentally, everything,” she said. “I started writing when I was 15, 16 and I think that that has changed a lot. I’ve gotten way more confident in my writing and more competent just to be able to write alone. I love co-writing still, but I also write a lot of my songs solo. I think my sound has sort of evolved from imitating other people to finding my own thing and just being myself.”

Yanofsky and her band, comprised of a bassist, guitarist, pianist and drummer, is excited about bringing that music to fans July 3.

“It’s going to be a really fun show for everybody,” Yanofsky said. “We have a lot fun, my band and I.”

Jazz on the Mountain at Blue features 25 concerts in total, including 100 musicians and performances by main stage artists Countermeasure, KC Roberts & The Live Revolution, Naturally 7, Brass Transit and 5 After 4.

To find out more about Jazz on the Mountain at Blue or purchase tickets visit www.bluemountainjazzfest.com.

To find out more about Nikki Yanofsky visit her website at www.nikkiyanofsky.com.