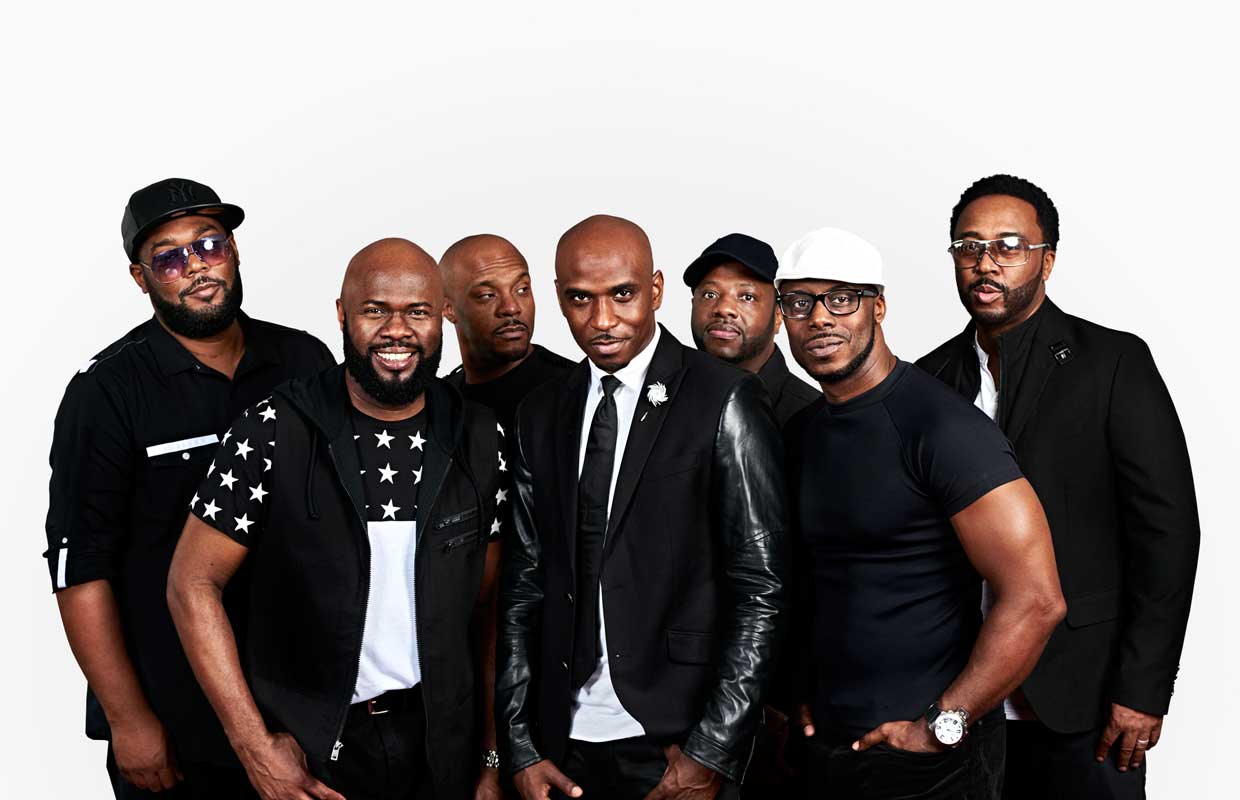 In a music world rife with technological tricks of the trade , one vital commodity is getting lost in the shuffle: the beauty of the human voice. Enter Naturally 7.

This seven-man crew is more than just your average singing group. Its members have perfected an intriguing a cappella style they’ve branded as “Vocal Play”—singing as instruments. In its quest to celebrate the voice, Naturally 7 not only sings but also creates every backing instrument heard on its songs. We’re talking drums, bass, guitars, horns, flutes … even down to turntables.

“Look at John Legend’s success with ‘All of Me,’ just him and a piano,” says Naturally 7 front man Roger Thomas. “People really do want to hear the true essence of a song and the person’s voice. It’s just a matter of being exposed to it. When people eat fast food every day, at some point they’ll say, ‘I have to have something different.’ And we’re that something different.”

They have also partnered with the General Mills Corporation on two Honey Nut Cheerios commercials which kicked off in November, 2014 first with a :15 second rendition of the classic jingle “Honey of an O.”  A second commercial spot premiered on NBC’s Today Show and features “Keep The Customer Satisfied.” a track featured on Hidden In Plain Sight.

Yet as Thomas acknowledges, “A lot of people still don’t know what we do.” So now the R&B, soul and pop group is revving up its U.S. album debut, the aptly titled Hidden in Plain Sight (Hidden Beach Experiences, February 10). Subtitled Vox Maximus Vol. 1, the 14-track set snaps, crackles and pops with riveting vocal gymnastics and rich, sparkling harmonies infusing a palette-pleasing menu of songs as wide-ranging as the group’s growing audience.

Leading the charge is first single “Fix You,” a cover of the Coldplay hit that’s become an audience favorite at Naturally 7’s live shows. The group’s harmonic reinterpretation brings a new intensity to the song’s refrain: “Lights will guide you home / And ignite your bones /I will try to fix you.” The associated music video, which premiered on Yahoo! Music, was described as “a beautiful mesmerizing version….which rivaled the original for haunting emotion” and continues to receive rave reviews from music lovers.

The group gives a nod to its spiritual influences by sampling Mahalia Jackson’s gospel classic “Trouble of the World” on the beautiful and raw “Mahalia.” Scoring a musical coup, Naturally 7 samples Queen’s “Bohemian Rhapsody” on “Galileo.” Notes Thomas, “We’re the first in the world licensed to sample the rock band, and we’re honored to be able to do that.”

Naturally 7’s aural magic really glistens on what Thomas calls “hybrids”: taking the essence of a well-known song and putting their own melodies and lyrics on top. Wham’s infectious “Everything She Wants’’ provides the impetus for “Life Goes On“ while Art of Noise’s “Moments In Love” finds the group imitating all of the song’s instruments and singing its own song to the mix on “Moments (I’ve Been Loved).” Among the set’s eight original tunes are “Keep the Customer Satisfied” and “Rhapsody of the Queen.”

Thomas likens the musical mash-ups on Hidden in Plain Sight to a chef experimenting in the kitchen. “He’s working with various food items that people have tasted before. But then he decides to mix two or three things together that no one has before. For Hidden, we began building with an operatic, classical vibe over an urban backbeat and jammed from there.”

That’s in keeping with the depth of Naturally 7’s musical influences, which range from a cappella predecessors Take Six and Bobby McFerrin to hip-hop’s Doug E. Fresh, the Fat Boys and OutKast. In between are ‘40s R&B quartet the Ink Spots, the Carpenters, Earth, Wind & Fire, the Bee Gees and the Beatles.

“We want to bring the group dynamic back,” says Thomas. “For too long now, there have been no harmony groups like the O’Jays, Four Tops, Jodeci and Boyz II Men. We want to carry the banner for that resurgence.”

Naturally 7 rose to prominence in 2007. Jumpstarting their exposure:  a video of the group on a Paris subway train singing Phil Collins’ “In the Air Tonight” that went viral and exploded on YouTube. After Bublé tapped the group as his worldwide touring partner,

Now Naturally 7 is ready to stand front and center with Hidden In Plain Sight. “Most a cappella groups just focus on the a cappella part,” says Thomas. “And that’s fine. But we also try to make sure it’s about good songs. Those never die.”