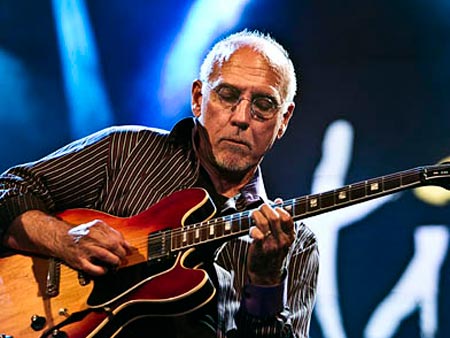 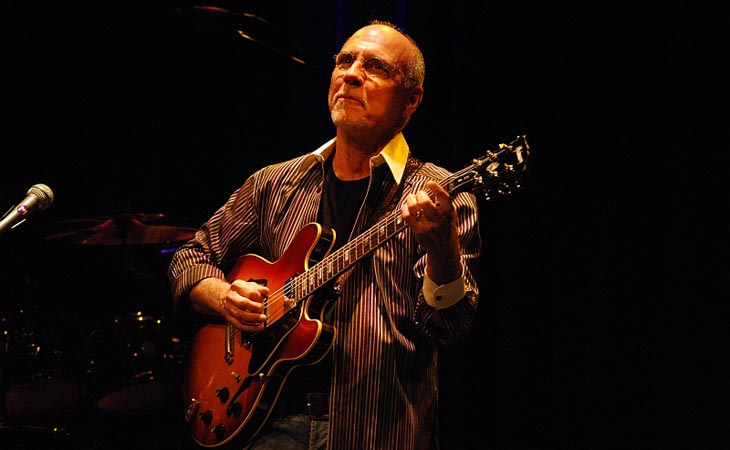 Larry Carlton’s own musical story began in Southern California. He picked up his first guitar when he was only six years old. He was introduced to jazz in junior high school after hearing The Gerald Wilson Big Band album, Moment of Truth, with guitarist Joe Pass. Larry then became interested in Barney Kessel, Wes Montgornery and the legendary blues guitarist B.B. King. Saxophonist John Coltrane was also a major influence on Carlton, beginning with Coltrane’s 1962 classic Ballads.

In 1968 he recorded his first LP, With A Little Help From My Friends (Uni). The enthusiastic industry response garnered him a place among jingle singers The Going Thing, recording on camera and radio commercials for Ford. Mid-season in his second year, he segued to Musical Director for Mrs. Alphabet, an Emmy-nominated children’s show on the same network. It was here that Carlton showcased his acting skills, performing as the show’s co-star, “Larry Guitar.”

Calls began to increase significantly as Carlton gained distinction for the unmistakable and often imitated “sweet” sound he delivered with his Gibson ES-335. He also broke new ground with his new trademark volume pedal technique, eloquently displayed in his featured performance on ­Crusader One with legendary jazz/rock group The Crusaders in 1971. Joni Mitchell’s Court and Spark album, the first record she made with a rhythm section, displays his distinctive Technique – a style Mitchell referred to as “fly fishing.”

During his tenure with The Crusaders (through 1976), Carlton performed on 13 of their albums, often contributing material. In 1973, Carlton released his second solo project, SinginglPlaying, on Blue Thumb Records ­ aptly titled, as he not only played guitar, but also performed vocals on eight tracks. Carlton’s demand as a session player was now at its zenith, he was constantly featured with stars from every imaginable genre, ranging from Sammy Davis, Jr., and Herb Alpert to Quincy Jones, Paul Anka, Michael Jackson, John Lennon, Jerry Garcia and Dolly Parton. At the same time, he was still performing more than 50 dates a year with The Crusaders.

Before he transitioned completely to a solo career, Carlton became one of the most in-demand studio musicians of the past three decades. Carlton’s catalog of work includes film soundtracks, television themes and work on more than 100 gold albums.

Ultimately, Carlton began scaling back his session work substantially, while continuing to perform and record with the Crusaders. He shifted his emphasis to the challenges of arranging and producing, and built his own studio-Room 335-in his home. During this period he arranged and produced projects for Barbra Streisand, Joan Baez and Larry Gatlin, as well as producing and co-writing the theme for the hit sitcom Who’s The Boss and co-writing (with Michel Columbier) and arranging the acclaimed movie soundtrack for Against All Odds.

As his association with the Crusaders began to draw to a close, Carlton signed with Warner Bros. Records in 1977. Between ’78 and ’84, Larry recorded six solo albums for Warner Bros. Records: Mr. 335: Live In Japan, Friends; Eight Times Up; Sleep Walk; Strikes Twice; Larry Carlton. The latter self-titled album was released hot on the heels of his debut session with rock supergroup Steely Dan. Rolling Stone magazine lists Carlton’s tasty ascent on Steely Dan’s Kid Charlemagne as one of the three best guitar licks in rock music.

With more than 3000 studio sessions under his belt by the early 1980s, Carlton had picked up four Grammy nominations. In addition to winning a Grammy (`81) for the theme to “Hill Street Blues” (a collaboration with Mike Post), he also was voted NARAS’s “Most Valuable Player” for three consecutive years. NARAS then named him “Player Emeritus” and retired him from eligibility.

In 1985 he was approached by the newly formed MCA Master Series to consider doing an acoustic jazz album. His first release for the new label was Alone, But Never Alone, a consensus No. 1 album on the Radio & Records and Billboard Jazz charts. The twelve months of 1987 brought some of the biggest highlights in Carlton’s solo career. In addition to winning the Grammy for “Minute by Minute,” Carlton received a Grammy nomination for “Best Jazz Fusion Performance” for his live album Last Nite. Coming off of the success of two acoustic albums and one live album, Carlton was on a hot streak and entered the studio to work on his next project, On Solid Ground. The all-electric project was nominated for a Grammy in 1989. The release of On Solid Ground came almost one year after Carlton was brutally shot in a random act of violence outside his Los Angeles studio.

In 1990, MCA acquired GRP Records and placed their jazz artists under the GRP moniker. Immediately, GRP issued a greatest hits package of Carlton’s work on MCA, called Collection. In 1991, Carlton entered the studio to record a blues-based album with John Ferraro, keyboard man Matt Rollings, bassist Michael Rhodes and harmonica player Terry McMillan. Interrupted by label and consumer demands for another jazz offering, Carlton temporarily shelved what would become Renegade Gentlemen and recorded and released Kid Gloves in ’92. A pop-oriented Jazz collection of lilting acoustic ballads and biting electric workouts, the album marked the first time Carlton had included both acoustic and electric tracks on a single solo project.

In between touring, Carlton resumed work on the bluesy Renegade Gentlemen. Taking the original six tracks to Nashville (his first time to record in that city), and joining up once again with Michael Rhodes and Terry McMillan, plus drummer Chris Layton (from Stevie Vaughan’s band Double Trouble) and keyboard wizard Chuck Leavell, he recorded four tracks, plus did additional production and mixing on the blues rocker in time for a ’93 release.

Carlton toured extensively that year and the next with jazz superband Stanley Clark And Friends (Stanley Clark, Larry Carlton, Billy Cobham, Deron Johnson and Najee). The quintet released Stanley Clark and Friends Live A t The Greek in ’94.

Larry & Lee, Carlton’s 1995 collaboration with guitar great Lee Ritenour, garnered him his eighth Grammy nomination. This was followed by The Gift in ’96 and Larry Carlton Collection Volume 2 in ’97. That same year, his virtuosity and reputation secured him a place in the crum­topping award-winning Warner Bros. Records’ group Fourplay, when member Lee Ritenour left to head his own label. Carlton doubled the fun by signing to Wamer Jazz as a solo artist at the same time. Since then he has released two albums with Fourplay: 4 in ’98 and a refreshingly different Christmas album, Snowbound, in October ’99. 1999 also brought Larry Carlton his very own spot on Hollywood’s prestigious Rockwalk. On June 3, he was inducted along with Joe Satriani, Steve Vai and Jimmie Vaughn.

The year 2000 starts with Carlton putting his singularly superb fingerprints on the new millennium with his star-studded solo release on Wamer Bros. Records, Fingerprints. Utterly unique, Larry Carlton has set a standard for artistry that spans three decades (and two centuries) and he is undoubtedly destined to leave his mark on jazz, blues, pop and rock for the foreseeable future.