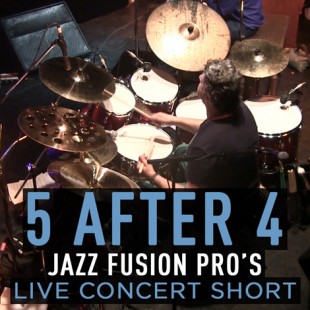 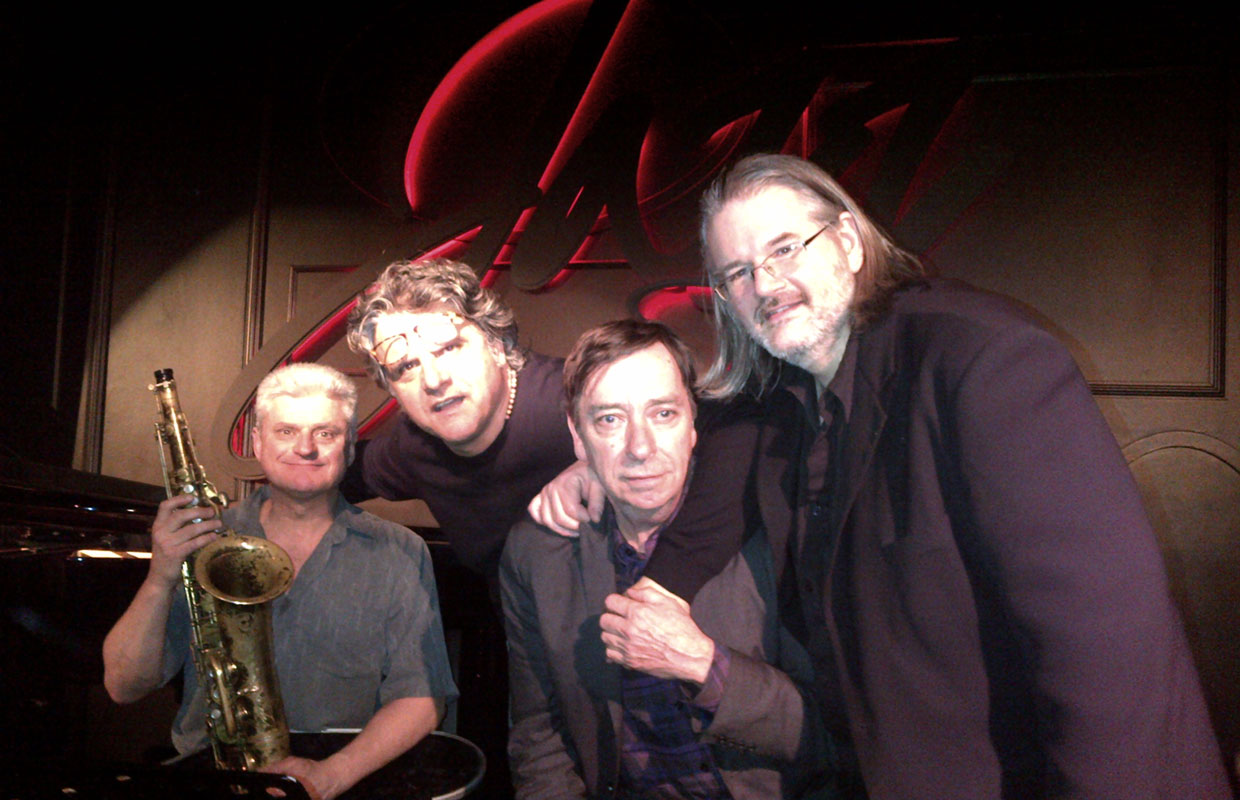 From 5 After 4 comes six. This highly-acclaimed veteran Toronto contemporary jazz combo makes a welcome return to recording with a sixth album that showcases the sound of four guys playing at the top of their game. The happy outcome is Rome In A Day, scheduled for release on prestigious independent label ALMA Records on June 28 in Canada and August in the US and worldwide.

The album is a masterful and delightfully diverse collection of all-original new 5 After 4 material. The group’s founder and driving force, drummer/composer Vito Rezza, contributes six compositions, long-time keyboardist Matt Horner chimes in with four numbers, and the freewheeling “Animal Crackers” is credited to all four members.

Joining Rezza and Horner in 5 After 4 are saxophonist John Johnson and bassist/producer Peter Cardinali. All four players have performed and recorded with each other in different musical configurations and settings for several decades now, with a clearly audible empathy resulting. Matt has played on four earlier 5 After 4 albums, and Peter and John two apiece. Johnson points out that “I’ve played with Vito for over 30 years now, and this musical intuition just happens. People often comment on just how tightly we listen to each other, but we’re not even trying to do it.” To Cardinali, “When we play, it can get quite euphoric. It becomes a conversation between the players.” Vito agrees, noting “we never tussle in our playing. We discuss, and nobody misses anything the other guy does.”

The close personal and professional rapport of the members of 5 After 4 shines through on Rome In A Day (the album is named after an action-packed day last year when Peter showed Vito the city for the first time). This Rome wasn’t built in a day, but was primarily constructed over groups of sessions this past year. Four of those sessions took place in the rustic setting of The Bathouse, situated near Kingston. Owned by The Tragically Hip, the studio has long been a popular destination for leading Canadian rock and roots artists. This may well be the first jazz album ever recorded there, and it was a personal invitation from Johnny Fay, The Hip’s drummer, that brought the group there. Vito picks up that story: “Johnny is one of my long-time students and a good friend. I played him some new music and he went ‘that’s beautiful. You’ve got to do another record. We own a studio and you should go there.’ Next thing I know I get e-mails from their in-house engineer, Aaron Holmberg, asking when we were coming!”

Such an offer was too good to refuse, and the studio proved perfect for capturing the warm ambience of Rome In A Day. “You’re not really in a studio there, you’re in a house,” explains Vito. “We hung out together, cooked great breakfasts and pasta, and played. We did 12 tracks in four days and enjoyed every minute of it.” Peter Cardinali adds “whenever you get away from your own city and surroundings, it becomes like a little commune. You hang out together, you eat together, you sleep under the same roof, and that creates a much different atmosphere.”

The album was essentially recorded live off the floor, with some minimal overdubbing later being done in Toronto studio The Drive Shed. Further freshness was guaranteed by the fact that 5 After 4 didn’t even rehearse the material prior to entering The Bathouse. “You have to live in the moment and just catch the vibe,” explains Matt Horner. “Some of us had never heard the songs,” says Cardinali. “We just hit record and played them. I love doing that. For me, there’s nothing like the raw energy and excitement of a first take. My ideas are freshest then and I’m able to convey them right away.” Such an adventurous approach is a signature of Cardinali’s production work, as exemplified by his internationally-praised One Take series. Its four albums to date have featured such jazz greats as Joey DeFrancesco, Terri Lynne Carrington, Guido Basso, Phil Dwyer, and Vito Rezza (on Volumes One and Four) recorded in just one take, with no rehearsals, overdubs or edits.

Each member of 5 After 4 had plenty of creative input on the compositions Vito and Matt introduced. Horner cites his stirring “Top Hat” as an example. “I wrote 12 notes (twelve tone row) and it’s a blues. Peter did the horn arrangements, Johnny came up with some other things, and they just took the ball and ran with it.”

Having talented composers within the group helps account for the refreshing range of material on Rome In A Day. Vito describes Matt as “a minimalist. He writes minimal melodies with beautiful harmonies all the time.” A perfect example of this on the new album is the gently lyrical “Changing of Seasons.” Vito recalls telling Matt “‘I can’t get that damn song out of my head. Matt said ‘good. That’s where it’s supposed to live!'”

Cardinali has watched the development of Rezza as a writer with real enthusiasm. “He just keeps getting better. Vito has an unbelievable sense of harmony and he writes beautiful melodies. He is a very romantic writer, and not many drummers can write that kind of in-depth material.” For a man who first made a mark as a truly explosive and volcanic virtuoso on the drums, Vito has matured into a writer with the soul of a poet and the heart of a lion.

Rezza is a genuine renaissance man, an accomplished poet, film and television actor (he has just shot a new Stone series movie with Tom Selleck), and martial arts expert. A deeply thoughtful and spiritual individual, he takes inspiration at home and abroad. The sweetly contemplative “Lee’s Mystery” is dedicated to his daughter, while “Mr. Govindas” came from reading a true story by Deepak Chopra about a destitute alcoholic outside a Mumbai hospital. It is a haunting ballad punctuated by, in Vito’s words ” Zappaesque rhythmic figures that create a staggering and dysfunctional feeling to represent the sick man.” When that sort of imagination is matched by the stellar musicianship of the four comrades, magic happens.

Performing alongside contemporary music superstars is something the members of 5 After 4 have done regularly in their careers. Vito Rezza has worked with the likes of Joni Mitchell, Gino Vanelli, John Lee Hooker and Big Mama Thornton, while Peter Cardinali’s extensive list of credits include Rick James, Brecker Brothers, Ray Charles, Anne Murray, Oscar Peterson, Michael Bublé, Larry Carlton and Teena Marie. The diverse list of artists John Johnson has accompanied include Aretha Franklin, Roberta Flack, Dianne Reeves and Bill Mays, plus Canadian stars Diana Krall, Holly Cole and Molly Johnson. Matt Horner is in great demand as a sideman for many leading Canadian artists, and his compositional credits include “Midnight in New Orleans,” a signature tune for Long John Baldry.

On Rome In A Day, 5 After 4 get back to the basics, as Vito explains. “It is more of a group record, with no special guests. In 5 After 4, I see myself as the instigator, not the leader. I planted the seed, Matt brought sun, Peter brought water, and Johnny ploughed the earth.”

Such creative alchemy has forged a musical gem. It’s now time to take a musical trip to Rome In A Day, a journey you won’t forget.